Now, note-taking apps have become increasingly common, with the wide availability of mobile devices. This means mobile apps for taking notes now allow you to write wherever you are, and there is a large range of apps available. 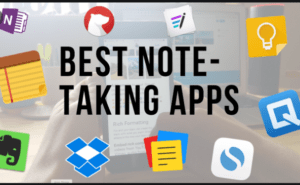 Although the note-taking application can be used by anyone regardless of your profession, anyone can make use of the application. For example an engineer on a call, a secretary taking minutes, or simply inspired by an idea while commuting. The ability to take notes on a mobile device can be a real benefit.

However, while there are basic software apps for taking notes, sometimes bundled for free with mobile devices, these can be quite limited to simply allowing the typed-in text to be used. These days much more feature-packed note-taking apps are now available.

These more advanced apps can work in multiple forms, from trying to replicate the word processing experience, to imitating blank notepads in digital form and so allow for handwriting and sketching.

Additionally, some note apps also include the ability to add images, audio, even video, to your notes, and even share these directly with colleagues and working teams.

Here, we will look at the best in note-taking apps currently available.

These are the best note-taking apps of 2020:

Microsoft Office has come a long way, from being a chunky software platform for your PC to the new Microsoft 365 cloud-based app which is sleek and accessible for any mobile device.

Even though most people might think of Microsoft OneNote or Sticky Notes as the basic note-taking app, why settle for a basic app when you can have the full power of the entire Microsoft Office suite on your phone?

That means having access to Word for starters, which is easily the most important document software available, and much more flexible and manageable as a format when it comes to note-taking than more basic apps.

For a start, you won’t need to worry about importing your notes into Word, which is what most people are going to need to do and there are also the advantages of being able to sync documents with your PC as well as work collaboratively with colleagues.

Perhaps more importantly, it means you can write, edit and send essential documents on the go rather than having to type up notes to later re-use or mine, saving so much time.

And that’s before we even mention Excel for spreadsheets, PowerPoint for presentations, or Microsoft Teams for video conferencing which is now built into the platform as standard.

Overall, Microsoft 365 is far more than just a note-taking app, which is why we’ve ranked it as the best.

It is established and full-featured. Characteristics of Evernote include:

Actually, no list of best note-taking apps is complete without Evernote, which is one of the oldest and most fully-featured. Evernote lets you create both simple and complex workflows using a combination of notebooks, notes, and tags to keep everything organized.

One of its best features for gathering research is the Web Clipper extension (supported in Chrome, Firefox, and Safari), which lets you save entire web pages including text, images, and PDFs – with a single click.

Notes can be accessed on laptops, mobile devices, and the web, so you are rarely left with a situation where you can’t retrieve what you have saved. Other features include the ability to set reminders, present notes PowerPoint-style, and merge them together.

Recent additions include new tables and a Siri integration for those using the iOS edition.

Furthermore, there is a free plan with some limited features, there are also two paid plans: one for individual users and one for business.

The Evernote Premium plan allows for integrations with Slack, Outlook, Google Drive, Microsoft Teams, and Salesforce, as well as provides an AI for content suggestions such as similar content in other notes you have made, as well as content info from media sites. This costs $7.99 (£4.99) per month.

The Evernote Business plan includes the above but also comes with collaborative options and team administrative features, all for $14.99 (£10.99) per user per month, with a minimum of two users.

This is a powerful Mac app for notes. Characteristics of Ulysses include:

Ulysses has been around for a while now, and it’s one of the most polished note-taking apps on Apple’s computing platform. (One that’s perfectly equipped for long-form writing, too.) Notes are written and stored in the app’s proprietary Markdown style, which allows for inventive (and colorful) use of headings.

In addition, images can be embedded in the form of links within documents; rather than displaying them in the body text, you can double click the links to preview image thumbnails. Ulysses also positions images in a sidebar that can also display a word count, mini notes, and other information at a glance.

Ulysses uses iCloud to save and sync your documents, and these can be exported to a number of other formats, including PDF, Words, doc, eBooks, and HTML. All these extra features come with a price tag, with Ulysses costing $39.99 (£35.99) a year or $4.99 (£4.49) on a monthly subscription.

This is one of the simplest ways to keep notes. Characteristics of Simple note include:

Simple note’s selling point is its clear, simple user interface, making it easy to keep track of notes. It is available for iOS, Android, Mac, Windows, and Linux, with data synced automatically. There’s also a web app if a client can’t be downloaded.

In other words, tagging and search tools ensure users can find what they are looking for and notes can be shared or published to others working in the same team or on a project. Simple note backs up previous versions of documents so it’s always possible to revert to an earlier one.

Simplenote doesn’t have many advanced features but is an ideal candidate for simple note-taking. And best, of all, it’s free.

This is an elegant writing and note-taking app. Characteristics of Bear include

A relative newcomer to the note-taking app scene, Bear lies somewhere in-between Evernote and Ulysses, allowing you to create notes and sync them across various Apple devices using iCloud.

Using a Slack-like three-pane interface, you can arrange notes by applying hashtags, which allows a subfolder style system. Bear uses rich Markdown for editing, so you can insert links into documents without having to display the full URLs in a similar manner to Ulysses.

However, Bear, which is pretty easy on the eye, and one of the few polished Markdown apps that allow you to insert images directly into notes, which could make it a far more valuable app overall if images are a big part of your workflow.

Most of Bear’s features are free to use on any iOS device, but there is a paid-for pro-version with additional themes, export options, which costs $1.49 a month or $14.99 a year.

This is a collaborative workspace. Characteristics of Dropbox Paper include

Dropbox Paper launched in August 2016 and works across the cloud platform’s mobile suite for Windows, iOS, and Android. What separates Paper apart is its focus on collaboration, allowing teams to share their ideas, images, and videos for projects.

Meanwhile, there are integrations with productivity apps such as Google Calendar and Slack as well as some more surprising tools like Spotify.

Recent additions include new organization tools such as the ability to create mobile folders on the go as well as improved delete and archive features. Dropbox also redesigned the Paper homepage which brings users Paper docs and Dropbox files together.

Its enterprise features make it an ideal Best Note Taking Apps for iPad for business, but it goes without saying that you get the most out of it if you are already a Dropbox customer.

This is Google’s secret little pad. Characteristics of Google keep include:

Google Keep is the simplest note-taking app on our list, both visually and how it operates. Think of Keep as your place for storing digital post-it notes, with each note dotted around the interface as if they were laid on a table in front of you.

Therefore, Notes can be given labels, pinned to the top, given a color, paired with reminders, and collaborated on in real-time. Additionally, it also offers speech-to-text functionality so you can dictate notes on the go rather than have to write. There’s also the ability to set up checkboxes for lists to work through.

Overall, though, Google Keep is more minimal than other writing apps, which either works for or against it depending on your viewpoint. If you want to break away from your operating system’s notes app, but don’t want all of the features that come with other apps on our list, Google Keep is an, ahem, keeper.

This is a text editor with possibilities. Characteristics of atom include:

Something of a left-field choice, Atom is primarily an app used for coding, but its sheer range of customization options means that you can mold it into a useful text editor too. Because it’s based on common web standards, you can hack its CSS style sheet to create just about any visual theme you can think of.

Want to make it look and feel like Word 2016 with a Smooth Typing Animation-style effect? No problem. Want to write in Markdown with a solarized color scheme? Then download the Markdown Writer extension and choose from one of the hundreds of community-generated themes.

Certainly, the atom is far from perfect as a text editor due to its lack of one or two standard features such as an automatic grammar changer that have been standard in other note-taking apps for years. But it’s certainly one of the most interesting and capable when in the right hands.

Some Alternative Apps to Consider

The increased use of mobile apps has seen an explosion in the number of note taking and text editing applications released. Here are a few more that it might be worth keeping an eye out for:

Hope this works well for you. Thanks for your time. Let us know what you feel about this work.