Home Reviews How to Watch The Marvel Movies in Sequential Order 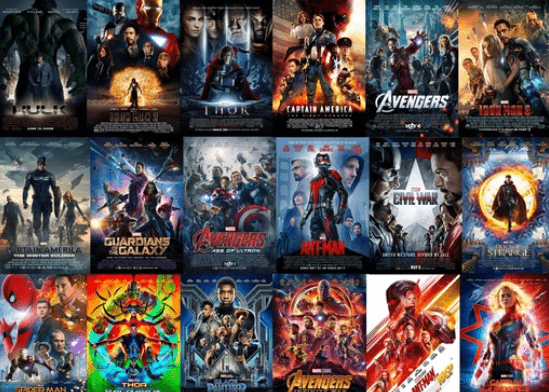 Meanwhile, we were hoping the story would continue with Phase 4 of the MCU this year, only the Disney Plus TV show WandaVision is releasing in 2020 now, while the Black Widow solo film has been delayed until May 2021.

Watching the Marvel movies in order will let you get caught up before WandaVision, then, and it helps that most of the MCU films are streaming on Disney Plus around the world in 4K right now.

Therefore, there are two main ways to watch the Marvel movies in order: there’s the chronological order, beginning with Steve Rogers’ origin in Captain America: The First Avenger, while watching the Marvel movies in release order starts with Iron Man back in 2008. We will explain both below.

Each list of Marvel movies ends with Spider-Man: Far From Home for now. Eventually, pandemic permitting that will change, with Black Widow, The Eternals, and Shang-Chi all due for theatrical release in 2021.

Consequently, Marvel is likely to be more active on the TV side next year, too: The Falcon and Winter Soldier will follow WandaVision, along with (as-yet-undated) shows based on Loki, Hawkeye, Ms Marvel, She-Hulk, Moon Knight, and Nick Fury. These canonical MCU TV shows will continue the story of the Marvel movies, exclusively on Disney Plus.

Watching the MCU movies in order is a very rewarding experience: it’s like the world’s most expensive TV series, with twists, big finales, cliffhangers, and those all-important post-credits sequences teasing what’s coming up. More so, the story threads like the Infinity Stones sometimes take years to pay off, but when they do, you feel invested in the outcome. This is why Marvel movies have owned the box office for so many years now.

Here, then, we will explain how to watch the Marvel movies in chronological and release order, and we will also rank the best Marvel movies and reveal those that can be streamed on Disney Plus right now.

How to Watch the Marvel Movies in Order: Chronological Order

A Marvel Cinematic Universe (MCU) timeline is probably what you are looking for. Here’s how to watch the Marvel films in chronological order, starting with Captain America: The First Avengers and finishing with Spider-Man: Far From Home (for now).

The reason to watch the Marvel movies in this order is pretty simple: you will see events play out as they happened, from Red Skull’s grab for the Tesseract in the ’40s all the way up to Peter’s school trip to Venice in the present day.

This is the chronological viewing order of the Marvel movies:

When 2021 Marvel movies like Black Widow and The Eternals are finally released, along with Disney Plus shows like The Falcon and the Winter Soldier and WandaVision, we will update this MCU timeline accordingly. Black Widow, for example, is confirmed to be set after Captain America: Civil War yet before Infinity War, but with its release date delayed until 2021, we have left it off this list for now. Notwithstanding, Avengers: Infinity War was the first of a two-part finale to Phase 3.

If you want to watch the MCU movies in release order, you will want this list, which starts with Iron Man in 2008 and ends in 2019 with Avengers: Endgame and Spider-Man: Far From Home. Therefore, watching the Marvel movies in release order is a terrific nostalgia trip, and you’ll see how the MCU films get better over time with increased budgets and better casts.

We have also included the future MCU Phase 4 release dates below for your reference, but they have been in flux a lot lately meanwhile, Black Widow has recently moved to 2021, making 2020 the first year to have no MCU movies since before it all began.

ALSO READ:  How to Negotiate Your Salary

The future of the Marvel Cinematic Universe

Marvel movies on Disney Plus

Wondering which Marvel movies are on Disney Plus? The below list is correct in the US, UK, and Australia as of September 2020. The Incredible Hulk and the Spider-Man films aren’t on Disney Plus because Universal and Sony own the distribution rights to them respectively. You will have to buy them on DVD, Blu-Ray or digital if you want a full Marvel movie marathon.

These are the Marvel movies on Disney Plus:

Finally, here are the all-original Marvel Disney Plus TV shows in the works, which will also fit into MCU continuity, with the exception of the animated show. Aside from WandaVision, these dates are tentative.

What are the best Marvel movies? We have all got an opinion (Civil War, Infinity War, and The Avengers for us) but below, we have let the people have their way, ranking the Marvel movies based on user opinions from IMDb.

The list gets some things right (Thor: The Dark World and The Incredible Hulk are definitely below-average), and other things rather wrong (Ant-Man and the Wasp are worse than Captain America: The First Avenger, in our opinion). Curiously, it’s a tie between the last two Avengers movies, Endgame and Infinity War, for the best film of the MCU so far.

So if you want to download Marvel movies, you can save offline copies via the Disney Plus app on your portable device (smartphone or tablet). Also, you cannot download any video via your desktop browser, though.

You will need enough storage space but just look for the download symbol on any title in the Disney Plus app.

Therefore, the content you download on your phone will stay in your device’s main memory if it doesn’t have an external microSD card slot. That includes all Apple iPhone smartphones, iPad tablets, and a few others handsets (like the Google Pixel 3a).

If you are happy to buy the movies, too, say through Amazon Prime, that will also allow you to download Marvel movies locally.