Home Reviews What is 4k Resolution, Overview and Perspective of Ultra HD

The 4K resolution is now the most powerful high definition quality, Hollywood films are predominantly produced in 4K to give viewers an amazing picture clarity, it makes viewers feel like they are inside the movie as a spectator. 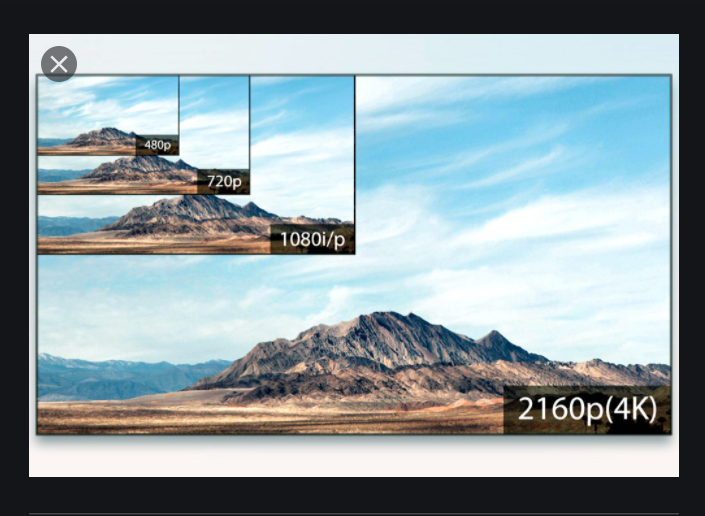 The other high-definition resolutions in use are 720p and 1080i. These are the resolutions most frequently used in larger screen televisions to create better detailed pictures.

This information applies to televisions from a variety of manufacturers including, but not limited to, those made by LG, Samsung, Panasonic, Sony, and Vizio.

What Makes 4K Resolution Stand Out?

What makes 4K resolution significant is that with the use of ever-larger TV screen sizes as well as video projectors, it provides much more detailed and less pixel visible images than 1080p. 1080p looks great up to about 65-inches, and can still look good in larger screen sizes, but 4K resolution can deliver an even better-looking image as screen sizes continue to increase.

The resolution remains constant regardless of screen size. However, as the screen gets larger, what does change is the number of pixels per inch. This means that pixels need to be increased in size, and, or spaced farther apart in order to maintain the same number of pixels on the screen.

How 4K Is Implemented

Although there are many Bluray disc players that upscale standard 1080p Bluray disc to     4K, only an Ultra HD Bluray Disc player can play discs that contain a real 4K resolution.

The U.S. 4K TV broadcast system is referred to as ATSC 3.0 (NextGen). Select stations in the 40 largest U.S. TV markets are expected to start regular broadcasting by the end of 2020.

What 4K Really Means for Consumers

The increasing availability of 4K resolution, delivers consumers a greatly improved video display image for larger screen applications, and can greatly reduce the ability for viewers to see any visible pixel structure on the screen unless you place yourself extremely close.

This means even smoother edges and depth. When combined with faster screen refresh rates, 4K has the potential to deliver almost as much depth as 3D without the need for glasses.

The implementation of Ultra HD doesn’t make a 720p or 1080p TV obsolete, although, as 4K Ultra HD TV sales pick-up and prices come down (you can find some 50 and 55-inch Ultra HD TVs for less than $500), fewer 720p and 1080p TVs are being made. Also, the current HDTV TV broadcast infrastructure will not be abandoned anytime soon, even as ATSC 3.0 begins to be used for content transmission.

Of course, just as with the 2009 DTV transition, there may come a date and time certain where 4K may become the default TV broadcast standard, but that means a lot of infrastructure needs to be in place.

Beyond 4K and Ultra HD

Now, what lies beyond 4K? How about 8K? 8K is 16 times the resolution of 1080p. There are a limited number of 8K TVs available for purchase by U.S. consumers, with Samsung taking the lead, but there is no real 8K content available to watch in the U.S. This means that for some time viewers will be viewing images on 8K TVs that are upscaled from 4K, 1080p, 720p, or other lower resolution. However, Japan has started broadcasting one channel of 8K content.

Here’s how to compare 1080p, 4K, and 8K resolution to the pixel resolution of even modestly priced digital still cameras:

Of course, all the above being said, you are the one that needs to be satisfied with what you are seeing on your TV screen, increased resolution is one part, but other factors such as video processing/upscaling, color consistency, black level response, contrast, screen size, and how the TV physically looks in your room all need to be taken into consideration.