Most James Bonde lovers get confused as a result of the many James Bond movies Out there in the market. But this article tends to solve that confusion by Presenting James Bonde movies in sequential order.  This will enable people to know which James Bonde movie was made after another.

Here, we will be enlightening you on the best James Bond movies and how to watch them in chronological order. Ahead of “No Time To Die”. 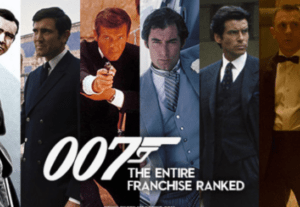 James Bond movies are an iconic part of the cinematic canon, ever since “Dr. No” released in 1962, but which is best? And which Bond is the best? These questions are enough to start endless debates in living rooms and on social media the world over. And while everyone has their own opinions, we can at least tell you definitively how to watch the James Bond movies in order.

“Dr. No” was the first adaptation of Ian Fleming’s books, and James Bond has been British cinema’s most beloved export ever since. 007 has since made extensive use of his license to kill, downed a distillery’s worth of martinis shaken, not stirred, naturally, and had very close encounters with all sorts of alluring femmes fatales.

Over 58 years seven different Bonds have headlined 24 official movies. Also, the seventh, Daniel Craig, is leading what appears to be his last 007 outings with No Time To Die, coming soon in November 2020. Therefore, when it comes to the best way to watch the James Bond movies in order, watching in release order seems logical. But then you have the 2006 Daniel Craig reboot, which went back to Bond’s origin story with Casino Royale, therefore resetting the sort-of timeline.

Whether you want to go the traditional release order route or a more chronological method, here’s a list of the best Bond movies, and several ways to watch the 007 spy thrillers in order.

Consequently, other movie franchises have nothing on 007 when it comes to longevity. 2020’s No Time To Die will be the 25th official James Bond movie (in other words, those produced by long-term rights holders Eon Productions), and there are two additional non-canon Bond movies: 1967 spoof Casino Royale and Sean Connery’s 1983 comeback Never Say Never Again (released the same year as Octopussy). Due to some quibbles over rights, the latter is effectively a remake of Thunderball.

Considering the Bond franchise has been running for well over 50 years, 007 have headlined surprisingly few bona fide classics. Ranking the 26 existing films based on IMDb user scores, however, it’s no surprise to see “Casino Royale”, Daniel Craig’s brilliant debut in the role, topping the table closely followed by “Goldfinger”, arguably the film that established the gadget-heavy template that Bond would follow for years to come.

The upper end of the list is dominated by Sean Connery, with his first five outings in the tuxedo all sitting pretty in the top 10. Roger Moore is defiantly midtable, while Pierce Brosnan (always a reliable 007) sees three of his four appearances languishing in the bottom 10 – the fun “GoldenEye” is the exception. It’s also interesting to note that films called “Casino Royale” appear at opposite ends of the chart.

Likewise, TV stalwart “Doctor Who”, James Bond eras are defined by the actor playing him. This list would be identical to James Bond movies in release date order were it not for Sean Connery’s two departures and subsequent returns to the role.

With Connery having quit the gig after his fifth Bond movie, “You Only Live Twice”, George Lazenby took over for “On Her Majesty’s Secret Service”. Connery was then tempted back for “Diamonds Are Forever” two years later, before leaving again seemingly for the final time. Until he was tempted back as an older 007 over a decade later in the unofficial “Never Say Never Again”.

ALSO READ:  Enroll At My Tupperware for Online Shopping

This is where it gets really complicated and confusing because there is no definitive Bond timeline as there is for a saga like Star Wars indeed, some elements of 007’s long screen life are actually contradictory.

Even though Bond usually exists in a Simpsons-like state of suspended animation, where the man stays more or less the same age (give or take a decade or two) while the world revolves around him.

One long-standing fan theory attempts to explain this and the secret agent’s ever-changing appearance with the idea that James Bond is not actually one man, but an alias for a succession of spies with the 007 codenames. We think that’s unlikely, however, because various elements of Bond’s personal history continue between agents and Sky fall quite explicitly shows us the Bond family home.

It’s probably better to look at the Bond series as two distinct continuities. The original saga began with “Dr No”, and runs all the way through to “Die Another Day”, released 40 years later. Although it’s never explicitly stated, you can comfortably assume that these films run in sequence. In fact, there are several key continuity elements that appear to confirm this.

The most compelling piece of evidence is the fact that in several movies released after On Her “Majesty’s Secret Service”, Bond refers to the fact he was married once his wedding turned into a wake when Bond’s wife was assassinated by Blofeld in that film.

This is most explicit in “For Your Eyes Only”, where we see 007 visiting his late wife Tracy’s grave, before going on a revenge mission against Blofeld. Hence, Blofeld never appeared again in the original continuity, so it’s safe to deduce that being dropped into a chimney did actually kill him.

Thus, we also know that “The Man with the Golden Gun” takes place after “Live and Let Die” because 007 meets Sheriff JW Pepper for the second time. The same reasoning can be applied to super-sized henchman Jaws in “The Spy Who Loved Me” and “Moonraker”.

The second continuity began with the origin story Casino Royale (2006), and runs all the way to 2020’s “No Time to Die”. This is the beginning of James Bond’s ’00s story based on Ian Fleming’s first Bond novel as we see him qualifying as a government assassin and embarking on his first mission.

The movies that followed have all been part of the same chronology, much more serialized than we ever saw in the original Bond run particularly with evil organizations Quantum and Spectre providing a throughline between each movie.

Whether the events of the five Daniel Craig films take place before Dr No is open to debate. On the yes side, we do see Bond’s first encounter with Ernst Stavro Blofeld in Spectre and it’s there the bad guy gets his famous scars.

On the against side, in “No Time to Die” Craig will be nearly 20 years older than Sean Connery was in Dr. No, while the fact Bond takes his classic Aston Martin DB5 out of storage in Skyfall suggests that Goldfinger is in his past. Maybe Craig’s films just exist in a parallel timeline-like JJ Abrams’ Trek movies.

The 1967 “Casino Royale” and “Never Say Never Again” exist entirely separately from the official continuity. See, we told you it was confusing.